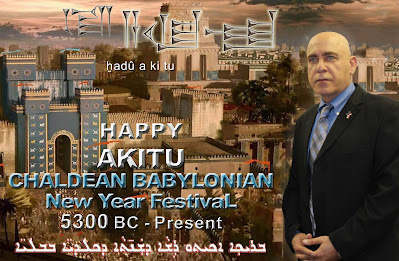 Celebrating Mesopotamian New Year on April 1 is dateable to the Babylonian First Dynasty, early second millennium BC. This Amorite/Proto-Kaldi dynasty is known for many great kings, including the legendary Hammurabi. In that era, religious, economical, and social aspects of life were modified and transformed from their earlier inherited patterns following the Babylonians' own culture and fundamental values. However, before that era, celebrating Akitu /Akiti in Sumerian marked one of the two major festivals, Akitu and Zagmuk (religious calendar vs. agricultural cycle), observed by the mid-southerners since the time of Eridu, 5300 BC. These two festivals were of particular significance in Kish, Ur, and Uruk before the Sumerian cultural influence around 2800 BC, particularly in central and southern Mesopotamia throughout the Neo Sumerian Empire/Third Dynasty of Ur (2112–2004 BC). Ur city and its God Nannar played a significant role in those celebrations, especially during the 2nd Mesopotamian Empire.

Ancient mid-centrists/southerners, whether Proto-Kaldi or during the influential Sumerian culture, adopted the fall equinox, Zagmuk, [1] as the beginning of the New [ZAG] Year [MUK]. It coincided with harvesting dates. They celebrated both spring and fall equinoxes with the same vigor and importance. However, the beginning of the year/literal translation of the Sumerian word Zagmuk was observed by the Proto-Kaldi. The festival's ceremonies concentrated on praising the date palm's sanctity, fertility, and the renewal of life "nature." Holy Matrimony, Hashadu, in the Babylonian period, stood for the sacred marriage of Marduḫ, the national God and his wife, Ṣarpanitum. Every year, their wedding was reenacted by the Babylonian king and the temple's high priestess, the divine lady, Entum.

During the Babylonian First Dynasty, Zagmuk merged with Akitu and became part of the Akitu rituals. As stated by Bidmead, Zagmuk and Akitu were initially derived from an idea of agricultural-religious roots. "The ancient viewed each as the onset of a six-month equinox year." Akitu festival of the first month, Nisanu, lasted at least from the beginning to the fifth of Nisanu, as noted in a series of tablets dating from Ibbi-Sin of Ur's reign. In contrast, the Zagmuk-Akitu festival of the fall lasted for twelve days, starting September 15. On the eighth day of the ceremony, Tammuz is liberated from the underworld, which coincides with the fall/autumn solstice on September 23 and the harvesting date. "The season of harvesting dates starts in mid-September and ends in mid-October." [2]

The name Akitu is derived from a very ancient name, a-ki-ti-še-gur10-ku5. It was the festival of sowing, harvesting, and wool shearing. It was celebrated in antiquity from March/Addaru to April/Nisannu, as well as from mid-September/Elulu to October/Tišritu. To the public, it also meant the beginning of the New Year, especially in the pre-Sargonic significant era, wherein Akitu was first celebrated as stated in the tablet obtained from Girsu, in the city of Ur of the Chaldeans. After the official festivities ended, it was celebrated in Nippur city. With the Proto-Kaldi/Amorites' predominance, Akitu started to be recognized as the beginning of the year, Reš šatti(m), in ancient Babylonia. Hence, Akitu ended up being recognized as the official Babylonian New Year festival.

The Babylonians alone celebrated the eleventh day festival of Akitu on April 1 of each year. While elsewhere in Mesopotamia, particularly the northern Shubaru region/Assur, it was celebrated on subsequent dates.

Traditionally, celebrating Akitu was mainly to acknowledge the supremacy of God Marduḫ. However, when Babylon was plundered by the Assyrian king Sennacherib in 689 BC, Babylon's magnificent celebrations came to an on-hold state in Babylonia for a few decades. Sennacherib celebrated Akitu in his capital, Nineveh, making Assur the focal point of the festival, especially after stripping the idol of God Marduḫ from the É-sagila, Babylon. Sennacherib's sons turned against him for the destruction he inflicted on Babylon; his other son Esarhaddon, who succeeded his father, immediately had Babylon rebuilt and reinstated the celebratory ceremonies of the supreme ancient Babylonian God Marduḫ. Cambyses II, son of the Persian king Cyrus II, was the last king who took part in the rituals of taking the hand of the supreme God in Babylon in 529 BC. In the Achaemenid king's reign, Xerxes I, Babylon was destroyed, the Ziggurat and the É-sagila temple were severely demolished in 482 BC. However, celebrating Akitu continued in the Babylonian region up to the mid-second century BC, as indicated in the tablets excavated in Uruk's city. People waited eagerly for April 1 since the Old Babylonian period. The Proto-Kaldi flocked to Babylon, the land's official and legitimate capital, where lavish celebrations took place. These vast gatherings and pilgrims came from all over ancient Mesopotamia, including Ahwaz, and the sea strip stretching up to Qatra/Qatar and the high Euphrates area as far as Haran. Akitu was celebrated in two stages and two locations—in the temple of God Marduḫ, Ésagila in Sumerian É-SAĞ-ÍL.LA, "the house that raises its head," situated in the Babylonian Ziggurat, the loftiest part of the É- temen-an-ki tower, foundation house of heaven and earth. The other location was Beth Akitu temple, located northbound outside the walls of the city. It is worth mentioning that since the early first millennium BC, God Marduḫ was usually called Bel, or the Lord because his real name was considered too holy to be pronounced. Similar to the Lord God epithet used by the Old Testament's scribes for Elohim, the Hebrew God. Akitu begins on April 1 and lasts for eleven days. Some scholars consider the twelfth day that marks the day where the hosted gods and goddesses returned to their cities as part of the official ceremony. On the first day, the Urigallu priests would recite sad prayers in the É-sagila temple. In their sad prayers, the priests would ask for Marduḫ's forgiveness. On the fourth day, a high priest, Sheshgallu, recites the creation epic Enuma elish in praise of Marduḫ. As Sheshgallu performs this essential function in the Nisannu/April ritual, he is customarily accompanied by musicians Kalu and Naru, actresses—Mummeltu and actors - Mummelu, who played the events of the epic.

After reciting the epic, the king heads to the temple of the God of writing, Nabu, son of God Marduḫ, to receive the high priest's sacred scepter. Then he travels to Borsippa, which is seventeen kilometers downstream from Babylon. He spends his night at the temple of the city's patron god, Nabu, revered by both Babylonians and Assyrians. Therein, Sheshgallu recites the epic of creation at the house of the New Year/Beth Akitu. The implication of the king's visit to God Nabu's temple is to help him release Marduḫ from captivity inside a mountain in the underworld, Kur, land of the netherworld. On the fifth day, the king returns carrying Nabu's statue, which he eventually leaves behind at the southwestern Urash gate. Then he lays down his crown, scepter, and the sword by the gate of Ésagila temple. After a series of ceremonies, he is returned his royal insignia after cleansing him and them with the holy water. Returning the crown to the king means his power was renewed by Marduḫ to be allowed to enter the temple to complete the celebratory ceremonies. The remaining part of the fifth day is dedicated to offerings and incantation rituals carried out by the Mashmashshu priest. He slaughters a ram and sweeps the temple walls with its blood and then throws its head in the river as a kind of scapegoat that casts out demonic powers. The king performs another ritual in the afternoon of the fifth day. He is accompanied by  Sheshgallu as well. That ritual mainly revolves around a wild white bull.

Meanwhile, the crowds would be fully excited, especially after Marduḫ's chariot passes in the streets without its driver, as a sign of dreading chaos that might befall the land before Marduḫ sets the universe in order. On the seventh day, the statue of Marduḫ and the other gods' statue is cleansed and clothed in new attires. Following that, Nabu visits the warrior god Ninurta in his temple. Together they join forces in a ceremonial play where Nabu and Ninurta's statues defeat two symbolic golden figures from the netherworld. Then the priests depart with Nabu and Ninurta's statues to É-sagila temple to join the Supreme God's statue, Marduḫ. And during the next two days, barges arrive at Babylon, carrying statues of gods from Ur, Sippar, Kutha, Kish, Uruk, Nippur, Borsippa, and the other cities. Next, the barges are placed on horse-drawn chariots.

On the eighth day, after the liberation of Marduḫ, the population's outbursts of rejoicing intensify. The statues of gods are assembled in the Chamber of Destinies in the order of their ranks, substantially to confer their combined strength on the restored God for the conquest of hostile forces and give Marduḫ the right to determine the destinies. This ritual takes place to renew fruitfulness and life for the coming year. This ritual is performed by the king who enters the great hall, grasping the hand of the great Lord Marduḫ, as he places him in the main courtyard of  É-sagila, where all gods grant Marduḫ absolute authority and recite his fifty compound names. After that, the parliament representative announces the next year's policy, just like the state of the union address. This policy always contains blessings, fortunes, and successes. At a later time, the king goes in procession from É-sagila riding the chariot of Marduḫ glowing in gold and silver, followed by the other gods' chariots while aromatic herbs burn with fragrance. They would head toward the river along with singers and musicians playing flutes. The gods' adoring devotees kneel in front of them. Finally, the procession would leave Babylon, heading toward the temple of Beth Akitu. After a short tour alongside the Euphrates, it reaches Beth Akitu, decorated with green foliage. The king then carries the statue of the state of the union. He brings it inside Beth Akitu, where ceremonial hymns are chanted, including the ones dedicated to Ishtar, goddess of sex and war, and the songs devoted to God Ea, father of Marduḫ and protector of Eridu. The last song is an alternating hymn in which the gods are asked why they are not in their temples. They reply that they had to be with Mardukh at that momentous event.

More offering ceremonies are performed, and the sacred marriage, Hashadu, enacted on the ninth and tenth days in a chamber called Gigunu/Gagum at É-sagila. It is designated to the high priestess. On day twelve, at É-sagila temple, once more prayers and good wishes are recited for the New Year at the presence of all gods that participated in the procession. Afterward, the celebrations are concluded with a lavish public banquet for all Babylonians and the pilgrims from other cities while singers recite hymns and play musical instruments.

The performers who partake in these celebrations are Astalu, the musician, Huppu, the dervish or performer of religious dances, Assinnu, the designated boy, Qapistu, the characters' caster, Quluu, the back chanters, Kur garru, the lamenter and one of the religious servants, Mubabbilu, the funny jester, Mummelu and Mummeltu, the actor and actress, Mustapsu, the wrestler, and Zammeru, the flutists and singer.

On that last day, statues of the gods promising to protect Babylon, consolidate its rule, and have leniency on its people, are returned to Marduḫ's temple. The first statue to depart Babylon is of God Nabu's, followed by the other gods' statues. Similarly, priests return to their temples, and daily life resumes in Babylon and the rest of the land.