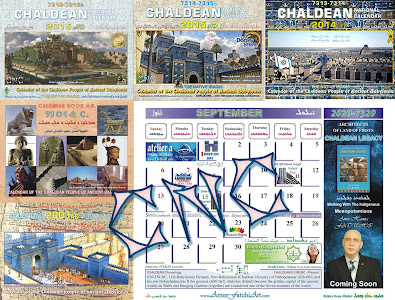 According to legend, Romulus, the founder of Rome, instituted the calendar in about 738 BC. This dating system was most likely a product of development from the Greek lunar calendar, which was originally derived from the Babylonians. However, the Roman actual calendar's date uses January as the first month of the year does not go back more than a couple of decades before the first century AD.

In fact, Julius Caesar is the one who established the Roman calendar using January 1 as the beginning of the New Year c. 46 BC. It is worth noting that January is derived from the two face god Janus, believing that Janus symbolically looked towards the rear into the previous year and ahead into the future. [1]

How Do CHALDEANS Compute Their NATIONAL CALENDAR?

One may ask, "How did native Chaldeans calculate the actual date of the Proto-Kaldi calendar, and what archaeological, Biblical, and scientific evidence would support this conclusion?"

Due to ongoing religious-ethnic persecution throughout the years, Chaldeans have abandoned but did not forget about their Mesopotamian roots and costumes. However, since 2000 Chaldeans have internationally adopted the New Year Celebration/AKITU of the first Chaldean Capital Eridu, founded around 5300 BC in the heart of the Chaldean historical homeland, Mat-Kaldu, as the beginning of Chaldean Babylonian history. This date was carefully studied and approved after months of hard work and profound academic examination of a submitted study by the author of this study to a professional committee of 12 scholars in the fields of social studies, including a few well-known historians and archeologists. The proposed research that was received in March 1999 asserts beyond doubt that Chaldeans are the ancient Babylonians and the descendants of the 1st Mesopotamian capital (city-state), Eridu. Among the main proofs that support the process, as mentioned earlier, are the solid facts below:

1-         The city-states of ancient Iraq did not have a temple with the same exact name, except for the god Marduḫ's Ésagila. The temple for ancient Mesopotamians was considered a living being, and the living being cannot be separated or exist in two places at the same time. However, the people who built Eridu and its suburb Ku-ara are the same ones who built Babylon and its temple Ésagila, at the holy district of Eridu, which simply means that both cities were considered one. In fact, Eridu, the holy district in Babylon, was wisely chosen as a linking vein that connects the two cities.

2-               According to the Nam-Lugal list and Berossus' Chronicles, the Babyloniaca, aka, Chaldeanica, Eridu and Babylon are the only cities in ancient Mesopotamia that held the name NUNki. This fact easily links both cities and their people's ethnic bond culture, especially when we learned that one of the most celebrated names of Babylon was Shubat Balati (Land of life). As it seems, this name was derived from the original name NUNKI (Homeland of life) that was used to refer by Mesopotamians to both Babylon and Eridu.

"Nabonassar collected together the records of deeds of kings before him and destroyed them so that reckoning of Chaldean kings might start with himself." 0F[2] It is also fully documented that Sennacherib in 689 BC did not only destroyed most of the Chaldeans records, burned libraries, and demolished the temples, but he also destroyed the entire city of Babylon as was recorded in his chronicles:

[Sennacherib avenged himself on Babylon and dared to accomplish the unthinkable: he destroyed the famous and sacred city, the second metropolis of the empire, the 'bond of heaven and earth' which his forebears had always treated with infinite patience and respect:

"As hurricane proceeds, I attacked it and, like a storm, I overthrew, it . . . Its inhabitants, young and old, l did not spare, and with their corpses, I filled the streets of the city . . . The town itself and its houses, from their foundations to their roofs I devastated, I destroyed, by fire I overthrew . . . So that in future even the soil of its temples be forgotten, by water I ravaged it, I turned it into pastures."][3]

4-                The Bible confirms in more than one place the profound and rich history of the Chaldeans, asserting that they are members of a mighty nation since very ancient time /a long-lived nation, an ancient nation (Jer. 5:15, U.S. Catholic Bible). However, the two main books of Genesis and Jeremiah, among other biblical books, could quickly validate this fact.

5-                The Greek and other classical historians highly valued the famous ancient encyclopedia BABYLONIACA, a combination of well-recorded epics and the most reliable old Mesopotamian records. The Babyloniaca asserts that a Chaldean dynasty was the first to rule Mesopotamia since Proto-Deluge time. It also confirmed that the first Mesopotamian king was the Chaldean A-LU-LIM/Alorus, 10 sars. 2F [4]

Conclusion: In a court of law, it is lawfully required that two witnesses ratify a testimony, and that is what the Bible requires. However, It was brought to your attention not two or three but five reliable references.  It could also add to the tens of linguistic proofs mentioned above and other historical records that exist within the Mesopotamian literature. These well-documented and solid pieces of evidence were covered in detail in my published books since 1988 AD. Perhaps the most recent comprehensive book is The Untold Story of Native Iraqis, which was instituted on foundations of more than 600 academic references. This book is among the top resources concerning this subject.

[1] Janus; is the copycat character from the more ancient two-face god Isimud, who is a minor Mesopotamian god and the messenger “minister” of the god Enki.

[4] The Bodleian Manuscript of Jerome's Version of the Chronicle of Eusebius, Reproduced in Collotype / (p7) The kings of the Babylonians (according to Alexander Polyhistor)