The Love Window to the Past! 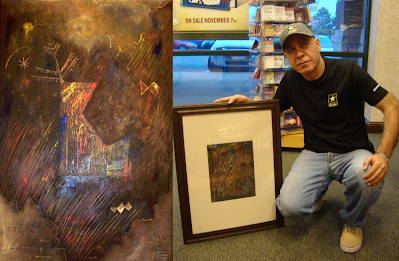 Tracking Love Footsteps in the Land of Eden

Oil with Mixed Media on Hard Board

The Art of Amer Hanna Fatuhi is all about a steady heart and a dynamic mind. Bridging between the deep past with the present and far future is his magical and artistic secret!

The Eight-Four millennium BC Mesopotamian pictograph writing system is the foundation and the inspiration behind this mixed media artwork that depicts scenes derived from the archaic dawn of ancient Mesopotamia and modern time challenges!

Fatuhi has been widely known since his two-man art exhibit (Siege) 1991 for his unique style in art that mixes between pictograph symbols and his exceptional technique. He usually uses multilayers of paintings with a texture effect made of various elements and implants all of that through several execution methods.

* The small-framed artwork is Tenacity, 1993