The Untold Story of Native Iraqis Vs. The New Fascists’ Propaganda


The Untold Story of Native Iraqis
Vs. The New Fascists’ Propaganda

Assyrian Cult’s Members, The Biggest Lie of all Time,
Calling for the Assassination of Amer Hanna Fatuhi 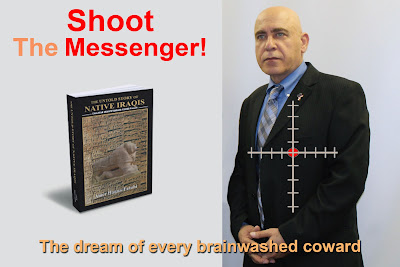 I would like to begin with a fact that should not just be on all billboards across the land but on every possible media outlet around the world. That simple fact is that the ancient Assyrians were never an ethnic group. Moreover, there was never an Assyrian language throughout Mesopotamia’s long and deep history. I challenge any scholar across the globe to prove me wrong.

Assyrians of the past, was a term applied to two very different groups. The first one is a mix of extinct and uncivilized mountain tribes known as the Asiatic-Anatolian Subartu / Shubaru who were not even a Semitic people. The barbarian invaders who took over north Mesopotamia for almost two centuries called their capital city (Assur), located in the Nineveh plain. The name Assur was derived from their foreign Asiatic-Anatolian god (Ashur / A-usar). According to many historical and tangible documents, that city was originally a Sumerian agricultural settlement.

The second group, who held the name Assyrians, was originally Babylonians who drove out the Shubaru and acquired the city of Assur as their new capital, starting with King Shamshi Adad I 1813 BC.
It is common that if you live in Paris, you will be called Parisian and if you live in New York, you will be called New Yorker. Does that mean your ethnicity is Parisian or New Yorker?

If you would like to learn more details about this subject, you are more than welcome to read my 550-page academic book: The untold Story of Native Iraqis, PP. 133-154.
Part II / Relishing the Illusion: Asiatic-Anatolian Foreign God Assur / A-usar
Difference between Subartu and Assyrian-Amorites (Chaldeans) | www.NativeIraqis-Story.com

Moving on from Babylon and settling in the ancient city of Assur by the Babylonians is quite similar to what is taking place nowadays, i.e. when an Iraqi family (state citizens) moves to the United States and become Americans (state citizens).
Moving and living in a new state does not change your ethnicity but it does change your citizenship identity. Once again, you do not need a rocket scientist to figure out that both names Iraqi and American are not ethnic names but state citizens, and that is no different from the ancient state names of Babylonians and Assyrians. 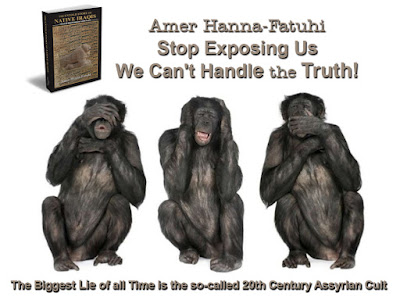 It is an inescapable reality that the so-called 20th century Assyrian ethnicity’s propaganda is based on forgery, falsification of history, lies, deception, and assassination!

However, the million-dollar question here is why would the 20th century Assyrian cult’s members who foolishly swallowed the 1884 British lie think that we have to be as dumb as they are and swallow such an improper lie?
The answer is quite simple: those insecure illiterate mountain tribes are dying out to wear any kind of skin that gives them the opportunity to be noticed, as well as helping their greedy leaders to put pressure on the world decision makers to support the idea of establishing an imaginary state on somebody else’s land.

The above known fact, that the local Assyrian dynasties were originally Babylonians, were scientifically and Biblically debated and approved in the above 550-page academic book The Untold Story of Native Iraqis.

Such fact is not only terrifying these deceivers but it is also eating the fraudsters of the 20th Century Assyrian cult inside out. You can also learn more about the biggest lie of all time, the 20th century short history of this made up cult by reading my letter addressed to the Secretary of State the Hon. John Kerry on February 11, 2015 on the link below:
http://kaldaya.net/2015/News/02/16_E1_ChNews.html

Since 2012, when my latest book was released in April, celebrating AKITU 7312, Chaldean Babylonian New Year festival, my book The Untold Story of Native Iraqis gives these bigots hell on earth, making their lives a 24/7 continues nightmare.

No so-called Assyrian scholar could or dare to debate the facts that were presented, which left this cult’s members no other option but to silence me and begin a long and intricate smear campaign ran buy a group of politically motivated thugs.
As usual, it is not a surprise that, they would resort to such tactics as forgery and cheap lies, which they have been continuously repeating about my book and me for the last two years, despite the fact that they know that every word they utter is a complete act of fabricated defamation.

To learn about this disgusting lie and the bigots behind this smear campaign against my book The Untold Story of Native Iraqis and me, kindly visit the link below:
http://kaldaya.net/2016/Articles/04/23_AmerFatuhi.html
Forgery and falsification of history is the cornerstone of this racist made up cult and their main tools of evil from Surma Khanum of Qudchanis to the most repulsive politician in modern Iraq’s history, Younadim Kanna and the bigots who are running this smear campaign against my book and me.
Below is one simple example of their continuous forgery taken from the same page that is spouting these lies about my book, which shows just how shallow-minded these deceivers are: 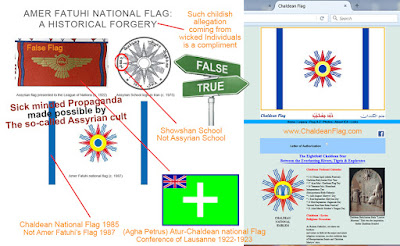 “By your own mouth, do I judge you” Luke 19:22
Top left image, a false flag, which does not belong to the 1920s period. Top right (left image), there is no word stating Assyrian, in Showshan school logo. In fact, this school belongs to the Chaldeans of Tehran and the actual name is Showshan School.

The brainwashed Nestorians of Hakkari and Urmia, Nowadays Turkey and Iran, who were imported to Iraq by the British in 1918, believe in the political-financial benefits of this lie, which was basically created by the British intelligence in 1884, are willing to do whatever it takes to achieve their dishonest goal. In order to do that, they have decided to adopt the tactic of the late master of deception, Paul Joseph Goebbels, the Reich Minister of Propaganda in Nazi Germany, whose motto was “If you repeat a lie often enough, people will believe it, and you will even come to believe it yourself.”

However, not every religious-secular leader of those illiterate Nestorian tribes agreed on adopting this false name. Yet deception, lies, viscous beatings, and assassination lead to silencing the brave voices. The final attempt in regards to the 1884 British plan was officially adopted when the Nestorian churches’ synod, accepted this made-up forgery in 1976 after being rejected by a few wise leaders of this cult who were silenced, one way or another.

The last standing was the courageous leader Mar Eshai Shimun XXIII, who was assassinated in California, on November 6, 1975 by the hand of David Malek Ismail, a fanatical, brainwashed politician and hardcore member of the racist political group, The Assyrian Universal Alliance Foundation. Patriarch Mar Eshai Shimun XXIII was senselessly murdered because of his courageous refusal to not change his Chaldean Patriarchal Seal to Assyrian or to adopt the phony, 20th century made-up name “Assyrian”. 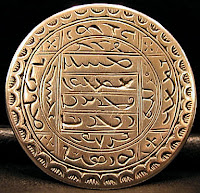 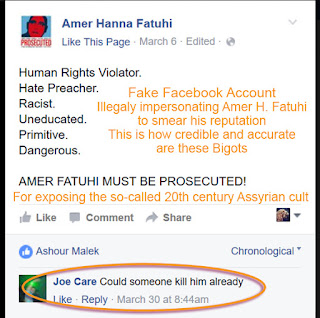 Left- Patriarchal Seal of Shimun Dynasty, the seal-center reads:
The humbled Shimun, Patriarch of the Chaldeans | Right- A call for the assassination of Amer Fatuhi by the above Facebook page created by the so-called  Human Rights Protectors, Love preachers, Tolerant, educated, civilized, peaceful!
Ironically, this same delusional hateful cult, whose basic pillars were and still are forgeries, lies, and falsifications of history, reached a conclusion that their publicly dismissed lie will not hold much longer and it will hurt them eventually, if they do not move to the next level of hate “assassination”.

It is a well-known and documented fact that this cult has used every aspect of social media in order to destroy the reputations of Chaldean intellectuals. If it is not working, then the alternative is “assassination”, starting with the calling for their brainwashed thugs and wild hyenas to kill those who could expose their forged identity.

During a social media chat that took place on Facebook on March 30, 2016, one of those bigots who is involved in this smear campaign suggested killing me openly, yet that fake Facebook account, which was immorally created to impersonate me and to smear my name and reputation, which was not shut down and is still up to this day!

To the bigots who wish to slander my book and my name with tons of sick-minded allegations and lies in order to bury the truth, I would like to say; the truth will ultimately prevail, because as once stated by William C. Bryant, “Truth crushed to earth shall rise again”.
I will always remember a quote from one of my favorite novelists Emile Zola, “If you shut up truth and bury it under the ground, it will but grow, and gather to itself such explosive power that the day it bursts through it will blow up everything in its way.”
These absolute cowards truly believe that calling for my execution could silence me, yet these ignoramuses fail to comprehend that not even Saddam, the once powerful dictator, who was one of the most brutal tyrants in the 20th century, could break me, or silence me. So do these criminals honestly think that a few brainwashed hot-air cowards can do the unthinkable?

To learn about Saddam’s regime attempts to silence me visit the link below (Voices Against the Darkness … Imprisoned Writers Who Could Not Silenced):
http://archives.worldlit.org/2009November/WLT-Nov09-prison-section.pdf

If there are any cowards hiding in the shadows, who are willing to prove how disgusting this racist cult and their members are, then let him do it. Any freethinker who fears darkness is nothing but a slave to the dark. Freedom and truth comes from within, yet freedom and truth require sacrifices. As stated once, “We can easily forgive a child who is afraid of the dark; the real tragedy of life is when men are afraid of the light.” ~ Plato

To my Chaldean sisters and brothers and to all freedom fighters all over the world, I would like you to remember that, “The truth is like a light, so do not ever fear the darkness. The cost of the truth is always invaluable, but good people have always paid it. My life is nothing but a leaf of true in the tree of light.” ~ Amer H. Fatuhi

Once again, the 20th century Assyrian cult is not an ethnicity. Every reputable historian knows this fact because the local dynasties that ruled the state of Assyria in ancient Mesopotamia (1813-612 BC) were originally Babylonians, descended from the Proto-Kaldi (5300BC).
This fact also applies to the original Assyrians (the Shubaru) around 2250 - 1950 BC, who were originally a mix of Anatolian-Asiatic tribes.

We the indigenous people of Iraq were and still are Chaldeans. May the LORD and Savior bless Chaldeans, our homeland, and the beautiful USA. Chaldeans are ultimately bystanders and in no way whatsoever associated with this hybrid, so-called 20th century Assyrian cult.

The direct response above to the politically motivated bigotry smearing campaign was meant to help others recognize what is genuine and help clear matter. However, a question may be asked, if my 2012 academic book mentioned above gives these deceivers hell on earth, then what could my upcoming book, CHALDEAN LEGACY, will do when it will be released in English and Arabic within the next few months?

Focusing on publishing my new academic study and not playing by the rules of these bigots’ political game is the right and the most civilized reply to the inhumane and malicious call for assassinating me.
Finally, the tangible historical proofs, which are the grassroots of my upcoming book, would leave the so-called 20th century Assyrian syndicate muzzled.
Posted by Dr. Amer H. Fatuhi, Ph.D., Visual Artist & Historian at 9:16 AM