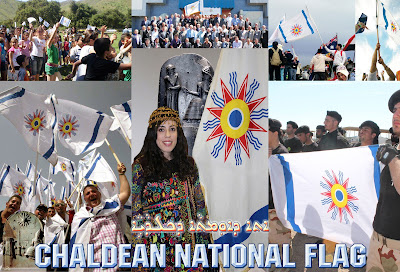 The first version of the Chaldean National flag was designed in 1985. It was officially recognized by the International Chaldean Visual Artists Association in 1997. Since its adoption, it proved to be a symbol of pride and unity among Chaldeans. Due to the fact that its genuine symbols are derived from their journey of over 7300 years. In other words, it represents the Chaldeans’ true national identity.
Since April 2011, Chaldeans around the world celebrated the 7311AKITU festival (Chaldean Babylonian New Year). Chaldeans in Iraq and all over the world, young and old, proudly took to the streets in joyous parades carrying the Chaldean National Flag of all sizes.
In 2011 and 2013, the two Chaldean International Conventions in San Diego, California and in Southfield, Michigan, USA unanimously approved the flag as the only legitimate Chaldean National Flag that represents our Chaldean Nation. 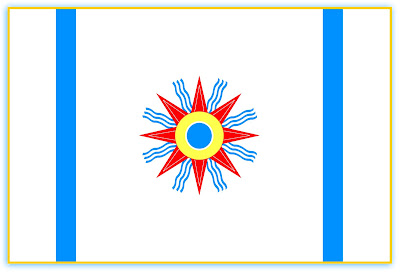 Description of the Chaldean Flag
The Chaldean Flag, which was designed by the Chaldean international artist Amer Hanna Fatuhi comprises of two vertical lines in blue pantone 300 C, and a Mesopotamian eight-fold star with two internal circles. The outer circle is pantone yellow C, and the inner circle is blue pantone 300 C. The two vertical lines are close to the outer edges of the flag in its traditional proportion (its length = one time and a half its width). On the white square in between them, there is the Chaldean Babylonian eight-fold star from which blue rays radiate, pantone 300 C. The beams of the eight-fold star contain two interlaced pantone red 485 C triangles separated by an angle made up of two connected white lines.

Visual Elements of the Chaldean Flag
The two vertical lines represent the eternal rivers: Tigris and the Euphrates which spring from the north and flow into the south of the Mesopotamian land. They signify abundance and generosity, whereas the sides, the eight beams and the yellow disc of the sun signify goodness, justice, equality and civilization. If we add the inner blue circle representing the moon, they would then signify the major celestial bodies according to the Chaldean Babylonian belief. The two circles implicitly signify the Chaldean cultural contributions in all areas of knowledge particularly ancient Chaldean astronomy, the cornerstone of modern astronomy.

Chaldean Flag Day
The Chaldean Flag Day is in honor of king Nabopolassar founder of the Imperial Chaldean Dynasty who is also hailed as the liberator of Babylon on May 17th ,4674  (in the  Chaldean calendar), 626 BC. Six months later, on November 23, 626 BC, Nabopolassar assumed the Babylonian throne.

To learn more about the Chaldean flag and emblem, visit: www.chaldeanflag.com

Courtesy of A. H. Fatuhi | UR Multimedia LLC