The Past Shaping Life Future Challenges Through Art! 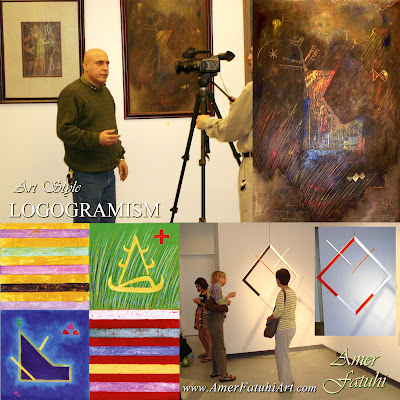 The Art of Bridging the Past and the Future!

At the beginning of 1988 artist, Amer Hanna Fatuhi, who became an international figure after winning the 1984 UNESCO Award and was featured on national and European art and cultural magazines, decided to leap from the Rhinoceros period RP of his 1985 One-man show "Home of Madness". As many art critics wrote about, this artistic period has dominated Fatuhi's artwork since his first One-man art exhibition, The Hard Time, 1981.

Artist Fatuhi was so wise to not jump in the dark but to walk gradually by blending his three compositions in one challenging path that contained:

1- The Minimal Symbols and Signs on a two-dimension background; most of these paintings appeared in his work when he was a university student. On those artworks, Fatuhi used mixed media and symbols derived from space and physics theories with pictograph, cuneiform symbols, a single word or a phrase from his published poems, i.e.,  Adam & Eve, The Everlasting Cold, Nadia, The Sorrow of Lady L, and A Freedom to Nowhere!

2- His second One-man show's main purpose was to demonstrate the artist's capability in figurative art while depicting metaphysical themes. Artist Fatuhi borrowed one simple technique from that show, not from the large paintings but the simplified Rhinoceros head that dominated his sketches.

3- In his Pictographic 1988 new line of work, artist Fatuhi used the head of the Rhinoceros as a colorful background to fill it with Logogram/pictograph symbols. These symbols were derived from the Mesopotamian 3D Clay Token writing system founded during the Neolithic period between 8000-5600 BC, more than 10,000 years ago!

By the end of that year, artist Fatuhi created over 200 artworks, mostly Monoprint art and Hot-printing, a technique he created in the same year. These artworks traveled the world and became the artist's hallmark among other modern and postmodernist artists. Many European, Canadian, and U.S. museums collected those works and hosted Artist Fatuhi and his new unique artworks, especially after his 1992 Two-man exhibition SIEGE and his two groundbreaking One-man exhibitions THE CHAMBER, 1992, and LOOKING FOR ANOTHER PARADISE,1994.

Like how Van Gogh, Gauguin, and Picasso were influenced by the Japanese art, Tahitian women, and African masks & sculptures, artist Fatuhi focused on exploring and studying the Kishian Pictograph writing system (From Kish, the first city-state after the great Mesopotamian flood). Since then, he has become the only worldwide artist who created this one-of-a-kind artwork style called in 1992, LOGOGRAMISM.

It is no secret that Fatuhi's academic background and expertise in fine arts and ancient Mesopotamia motivated him to create LOGOGRAMISM to illustrate modern times' challenges freely. Being a well-known rebel artist, he went beyond the traditional paintings and sculptures by departing in 2006 from the canvas and focusing on the frame. He also started creating artworks mixing multi-layers of sharp and neutral colors or using just one color with daylife materials to create texture impressions and visual effects. This thinking out of the box and no rules also allows the artist to create a panoramic 360-degree artwork, which builds his legacy over time!